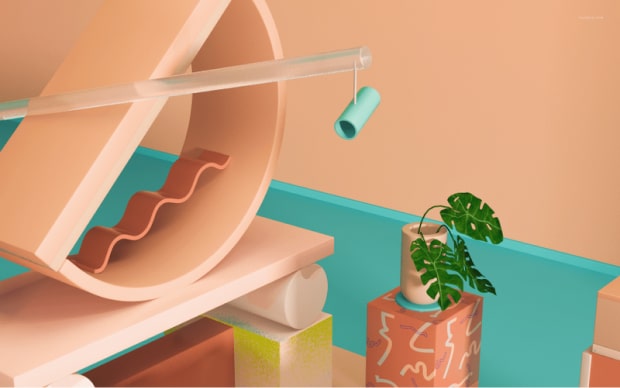 Today I come to talk to you about this movement, which also arose in England at the end of the 19th century, between 1870 and 1880, but I promise you that for the next article I will leave this country, and I will talk to you about the Chicago School (the one with the skyscrapers).

We shouldn't confuse it with the current term of Aesthetic that we see on the internet with everything related to Tumblr, Vaporwave, Lo-fi music and all our modern stuff.

Aestheticism sought the pure beauty and sensual qualities of art and design over the practical, the moral, the social themes and the narrative, as a reaction to the ugliness and materialism of the industrial age, opposing the utilitarian philosophy and interested in describing reality even in the most banal and for creativity; basically what he was looking for was to escape from the discomfort and pessimism of society, escaping from everyday life, so that one comes to see beauty as a lifestyle, inspired by the idea of art for art, art above any meaning. But it was not only seen in art and design, but also in literature, with writers such as Oscar Wilde, author of the famous work The Portrait of Dorian Gray.

Although it does not seem so, it was closely related to the Arts and Crafts (of which I spoke in the previous article), as it was born from this and even has antecedents in the Great International Exhibition (of which I spoke in the first article), with that rejection of "bad design", being commercialised by the London shop Liberty in 1875 (which also popularised Art Nouveau afterwards). Against Victorian design and its puritanical ideal, which mixed the industrial and historicism (the recovery of the past), it takes as its influence the Pre-Raphaelite Brotherhood, whose main artists also participated in this movement (Dante Gabriel Rossetti, Edward Burne Jones) and Japanese design, since by 1850 this country had opened up to the West, influencing art and design with a less overloaded aesthetic, without that horror vacui.

This gave rise to a more naturalistic design and the creation of interiors with the highest possible artistic value, with slender and luxurious furniture, decorated with motifs inspired by nature, to provide continuous inspiration to the inhabitants; the most outstanding is Christopher Dresser, considered the first independent industrial designer, who worked in all areas, although he stands out for his teapots, taking inspiration from Japanese craftsmanship, nature and Persian tradition to achieve maximum simplicity.

For more information I leave you again a link of the Victoria and Albert Museum, of which you can also see his collection and that in Youtube has quite interesting videos: https://www.vam.ac.uk/articles/an-introduction-to-the-aesthetic-movement

How to Measure Learnability of a User Interface‍

To measure learnability, determine your metric, gather your data, and plot the averages on a line curve. Analyze the learning curve by looking at its slope and its plateau.Alita Joyce

In this post I will present seven cognitive biases, how they can mess up your design work and what you can do to avoid that.Koos Looijesteijn

Task analysis is the systematic study of how users complete tasks to achieve their goals. This knowledge ensures products and services are designed to efficiently and appropriately support those goals.Maria Rosala

The How (and Why) of User Flows‍

The ability to create and think in user flows is one of the most important skills in a UX designer’s toolkit.Learn UX

Moving into design leadership: 4 ways to create visibility for your work‍

If you have an opportunity to help correct those gaps in a way that enables you or your colleague to get beyond the broken ladder—why not try? What I offer here are some ways to try.Angel Steger

It’s a simple, yet powerful phrase. Chances are, if you’ve used it before, you’ve likely faced a varying degree of opposition.James Edward Bonilla

The 5 main anti-trends in design‍

It’s a common narrative in tech to design products with the assumption that users are stupid and lazy. I think that is both disrespectful and wrong.Diana Malewicz

The key to choosing terminology is intent — what are you communicating about the experience?H Locke

The Ultimate Guide to UX Research‍

This comprehensive guide to UX research dives into the fundamentals of research and its various methods and includes tips and best practices from leading industry experts.‍

Visual feedback made easy. MarkUp lets you collect feedback directly on your live website or any image.‍

A free starter kit to help you master interactive prototyping in Framer.‍

Figma-Low-Code is an open-source project that enables the direct inclusion of Figma designs in VUE applications. By ensuring that the Figma design stays the single source of truth, this approach reduces the need for design hand-offs and front-end code significantly.‍